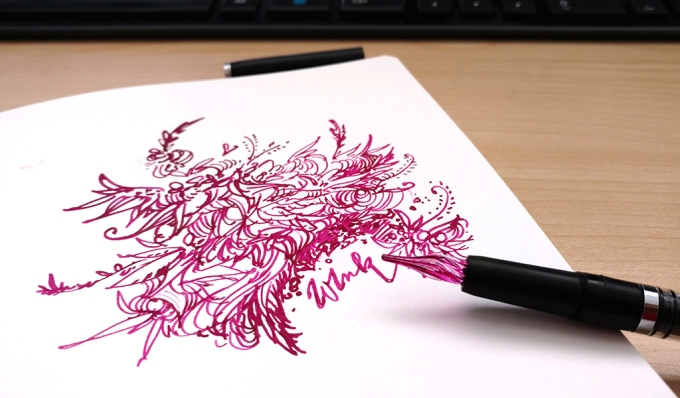 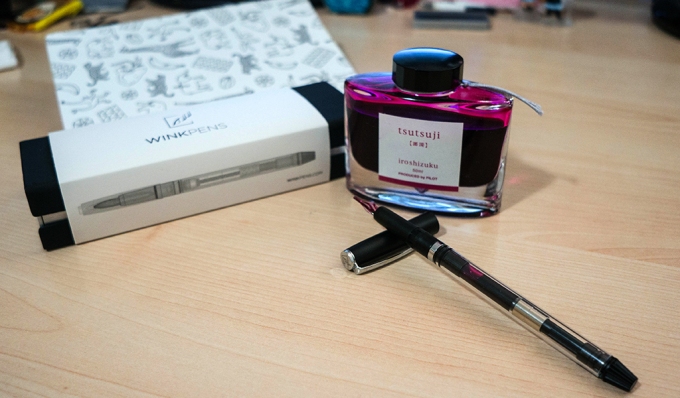 Hello forest, I am back! This was an interesting one to play around with. Today I’m looking at the Wink Pen First Edition. A borosilicate glass nib fountain pen with a refillable converter attached. I’ll admit, I went through a bit of a back on forth on edge about picking this one up. Initially just looking at the features and the relative uniqueness of the pen, I thought that I had to get my hands on it. But at the same time, the price point was not an easy pick up for me on top of reading some average reviews for the first edition run. Then one day I saw it on massdrop for a slight discount and decided to pick it up anyway and try it for myself. Suffice to say, I’m quite happy with my purchase, and really happy to add it to my collection, but that isn’t to say there aren’t some issues I have with it causing me not to use this pen as regularly as I’d like. Shall we? 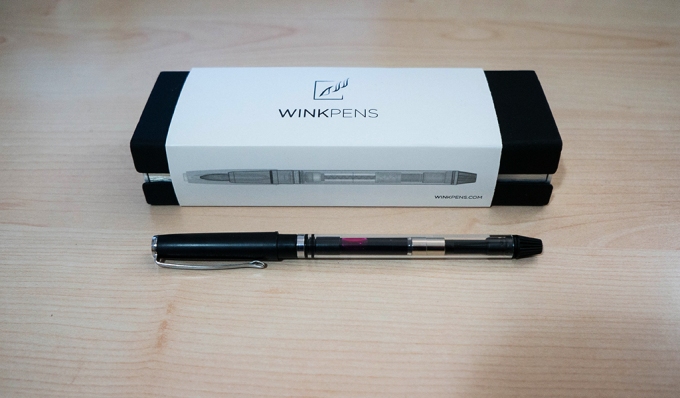 Look
Does this pen look super awesome? Not bad!

I actually quite like how it looks, mostly because I like slender looking pens (I have small hands). Its thin and long but doesn’t seem too out of the ordinary. It’s definitely one of the longest in my collection, by at least 1-2cm. This doesn’t bother me too much, since it still fits into my pencil case (barely). I can see it potentially being a problem though, and also probably one of the reasons the pen doesn’t post, because then it would just be unnecessarily long. Quality wise, it’s not bad either. The nib, as mentioned, is hand-made borosilicate glass. It’s really fascinating to look at, especially since everything else I own is just a classic steel nib. Like I mentioned, I’ve wanted to pick one up for the sake of owning a glass nib, so I have no qualms about my purchase. The barrel of the pen is also made of the same glass, which makes the pen a little more delicate even with the cap on. I like this though, because it gives the pen some more weight relative to a plastic barrel alternative. The pieces are modular and easy to take apart and put back together on both ends of the glass barrel. The cap is a simple black twist with a chrome clip, engraved with both the wink pen logo (now ‘Modern Human Instruments’) and creator’s initials. The packaging was classy, a magnetic flip box, with all the contents wrapped in a nice handkerchief with the Wink Pen logo all over it. There is a certificate of authenticity for the 2000 first edition pens, a manual, and the pen. 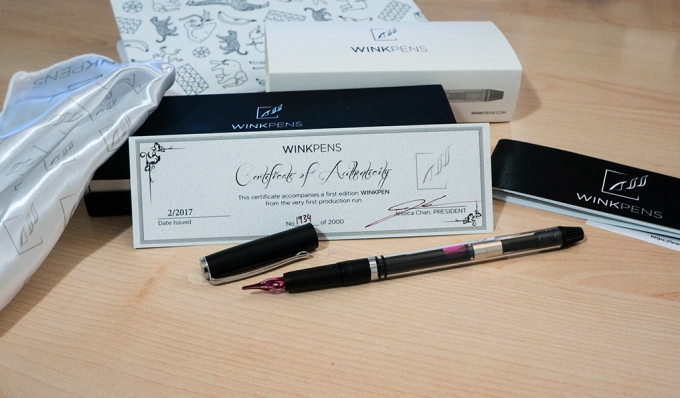 I gave this pen a ‘Not bad!’ because while I like the slenderness, build quality and clean look, it doesn’t look particularly special or fancily designed for its original marketed price of over a hundred dollars. Perhaps it’s the black plastic pieces that made me feel this way. I’m not opposed to plastic of course, but it’s definitely nowhere near the quality of the Lamy safari build. I would argue even the plastic on my penmanship feels a little sturdier. But at the same time, the pen is on a first edition run, and the idea itself is probably enough to warrant a purchase imo. 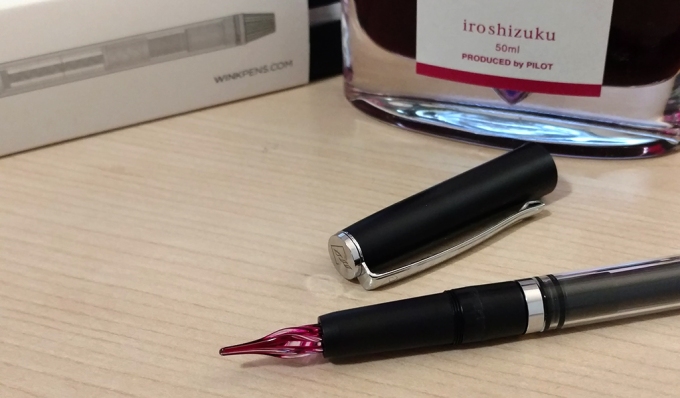 Feel
I’m going to go ahead and say it — I chipped my nib. And have since been very sad about it, preventing me from using this pen for sketching as often as I had hoped I would. But that doesn’t mean I can’t offer how I felt about the pen before I broke it and even now, since it is still entirely usable albeit less convenient. It happened after I cleaned the pen for the first time, and despite warnings to be careful and make sure the nib is pushed far enough into the coupler before capping it, I didn’t (I definitely thought I pushed it down enough!), and as I twisted the cap on, the screw inside the cap grazed the nib. How unfortunate and careless of me.

But that aside, as I used the pen over the course of a few days (before and after the debacle)  I would say it was a fun experience. I enjoy using this pen for loose sketching and a little bit of lettering more than everyday writing, since the nib actually is quite broad. There are varying lineweights you can achieve based on how the nibs were made, so there is a ‘broad’ side and a ‘medium’ side, but overall, both quite broad. After the chip though, I seem to have a little more variety in lineweights, but the thin lines are really scratchy (makes sense).

The ink flow has been a little frustrating the longer I use the pen in one sitting. It seems more often than not, I have to twist the converter to push ink through rather than it flowing down the nib on its own. I’m not sure whether this is due to how I put the nib back into the casing, or whether that’s just a mechanics thing, or it’s because my nib is a little busted. So because of these issues, it is a little bit hard to get consistent and controlled ink flow with the pen, which then makes it difficult to sketch. Once the pen is pumped from the converter a bit, the ink does flow quite well and it writes almost from any angle (except the chipped part), but this only lasts for a little while, and not long enough for me to complete a sketch. I would argue that before I chipped the nib, the flow was pretty decent and a lot easier to control. So this little mishap I will blame on myself and wouldn’t fault the pen’s mechanics for it.

You might notice that I switched sketchbooks for this review — I’m using a clairefontaine blank page notebook. I picked this up when I was in Ottawa, along with the petrol ink, having heard many amazing things about the paper but haven’t tried it myself until now. It really is quite brilliant fountain pen paper! Doesn’t bleed or spread, has great control, and the paper is super thin. Being so thin though, the paper ends up being a little too see-through, so I end up only using one side for nicer doodles or notes and the back side for light sketches. I switched to this book for this review because the ink flowed out of the pen so bountifully that it was bleeding on my other book. I’m a sucker for consistency, and really wanted to keep all the reviews in that one sketchbook, but alas it was not meant to happen. And so I have learned my lesson, that the paper does really matter! Not something I paid too much attention to in the past since I spoiled myself with leuchtturm1917s for most of my doodling and journaling — and those are some high quality notebooks.

The pen has been advertised to be able to draw ‘ink’ from any staining source, be it wine or coffee or the like. But I have read that they don’t work as nicely as fountain pen ink does, and I had bought the pen intending to only use fountain pen ink, so that’s what I did. Perhaps down the road I may find myself in front of a cup of coffee I don’t plan to drink anymore and will try drawing some to use, but I highly doubt it. 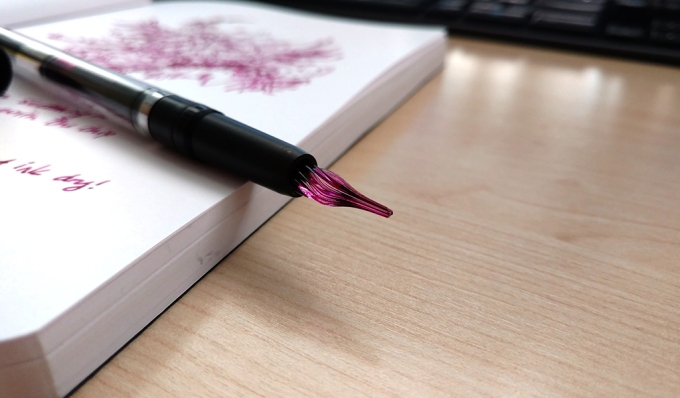 Value
Was this pen super worth it? Questionable but really depends!

I paid $60USD plus shipping for the pen, not cheap, but not the most expensive I’ve paid for a pen. For this price, I am willing to say it was worth picking it up as a novelty pen for my collection, but probably not as worth for a longtime use pen. I would also factor in that the original marketed price was over a hundred dollars, which having tried the pen out, I have to say wouldn’t have been worth it. But this is a first edition run for the pen, and I definitely commend and completely back the idea of a refillable glass nib fountain pen! I would also consider their future products and looking forward to what they’ve worked on for their next edition of the pen. I would also consider purchasing a spare nib if it was offered.

The ink I used for this review was from the Pilot Iroshizuku series. I’m not an ink enthusiast as I am with the actual fountain pens, so I don’t do any of the drying or bleeding tests with my inks. It is usually a trial and error to see whether I like it or not. That being said, I would really recommend this ink! The ink is quite smooth, viscous but not too runny. The colour I picked, tsutsuji, is sort of a magenta pink mix. It is very bright and striking, and depending how concentrated the ink comes out (usually by nib size), there can be a nice contrast between the thicker and thinner strokes.

The ink series comes in a multitude of colours (check em out — https://www.gouletpens.com/pilot-bottled-ink/c/185) so the chances of you finding a colour that suits you is very high. They don’t have anything particularly unique or special, (like cool drying sheen colours) but I like their variety. The colours tend to be on the variation side of the primary spectrum, which I guess is a little unique. So instead of a typical bright blue, they might have something like cerulean blue, or ultramarine, or grey blue. The bottle is quite nice too. It even has a little dip at the bottom of the glass for when you want to use the last drop of ink. They aren’t the cheapest inks, at $20, but they come in a big 50ml bottle which lasts a good while. I wrote through an entire 250 page leuchtturm1917 with just this ink, and I’ve only used less than a quarter. So it’ll definitely be worth it. 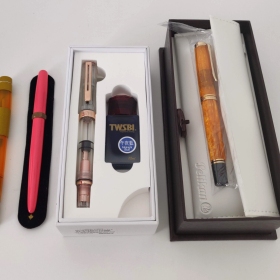 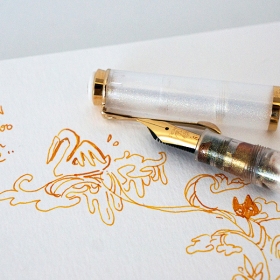 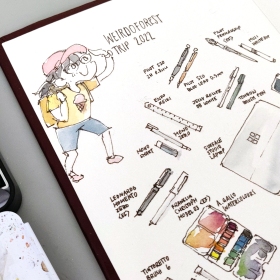 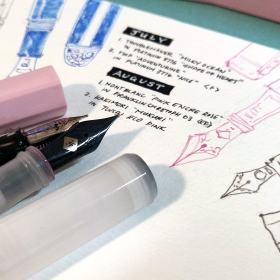 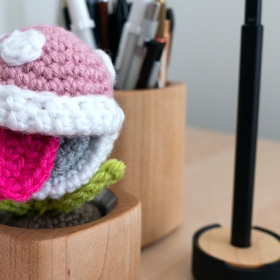 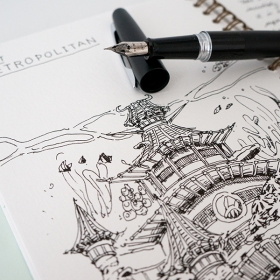