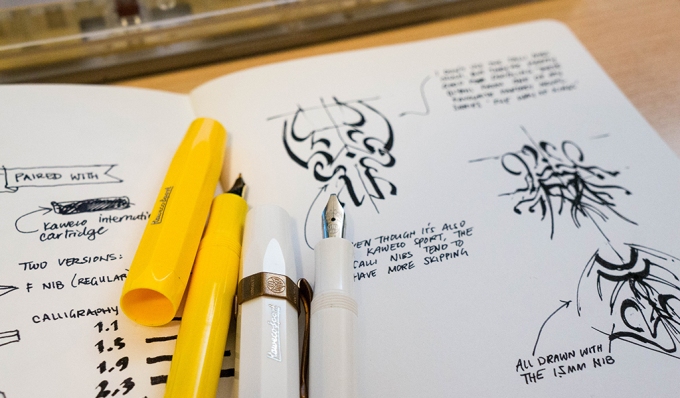 This little pen has been on my review list for probably almost a year mostly because I just don’t use calligraphy pens very often. It wasn’t until the special edition version of the Kaweco Sport came out at fontoplumo, that I finally succumbed and bought the F nib version.  Of course, as you can see, this SE is yellow, and it’s right up my alley. Let’s go!

Look
Does this pen look super awesome? Not bad! 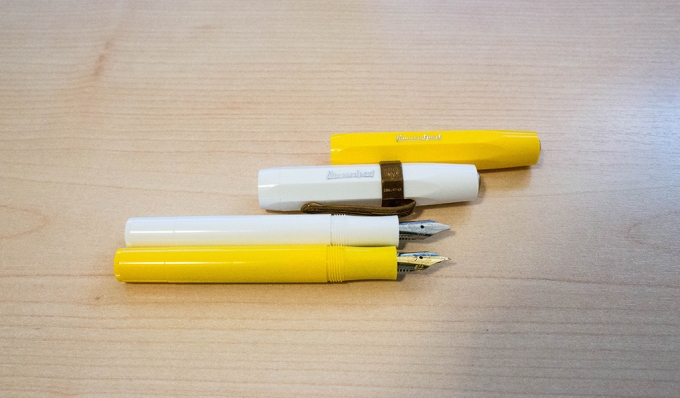 I like the look of the pen, for the most part. I’ll admit, It didn’t strike me when I first saw it, but it has certainly grown on me.  It’s possible the yellow colour really helped with that growing. The pen is tiny, as are most pocket pens. Kaweco is a leader in quality pocket pens, and even though this is their base-line entry level, it does not disappoint. It is made entirely of plastic, so the pen can come off as cheap looking at first glance. Upon closer inspection though, the gold or chrome finial with the kaweco logo, as well as the engraved logo add a little bit of spice. 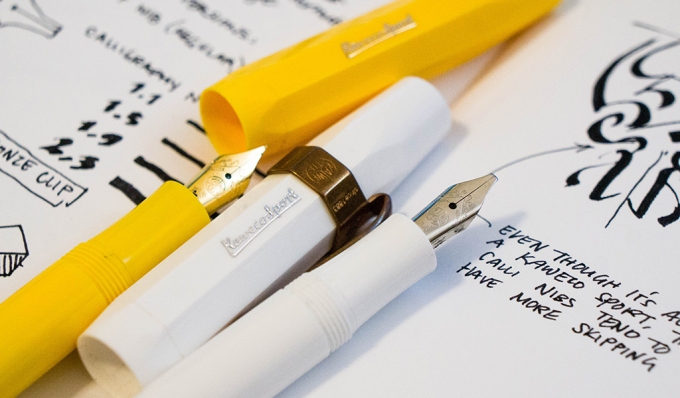 The two pens I have are identical except for the nibs, calligraphy and regular. The capped pen measures not more than 10.5cm. Posted is closer to 13cm. The reason I say I was not drawn to the pen initially was because the cap felt relatively special, with its hexagonal shape and cute finial, while the remaining inch and a half of pen looked kind of out of place and dismal. It’s possible the proportions bothered me a bit, as well as the contrast of something unique with something so banal. Having used the pen enough and enjoyed it, I have somehow been able to look past this strange feeling whenever I look at this pen from an aesthetic perspective. 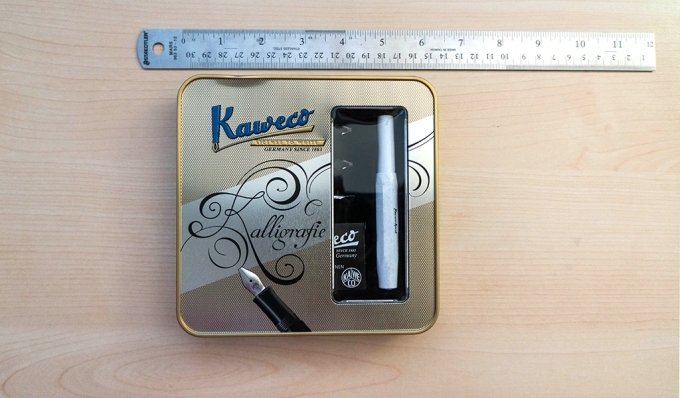 The packaging for the two were completely different. The calligraphy one, because it was a set, came in a nice tin can with all the pieces displayed in a clear window. It comes with four nib sizes total, 1.1mm, 1.5mm, 1.9mm and 2.3mm. Also included were these rubber caps that are meant to keep ink from drying if you’ve plugged a cartridge or converter in and want to switch nibs. And lastly there was also two(!) 6 Kaweco black ink cartridges in the set. On a separate order, I decided to get the bronze clip, cause who doesn’t love a little accent bronze on their pen? (it doesn’t really match the silver accents of the finial and nib though…) 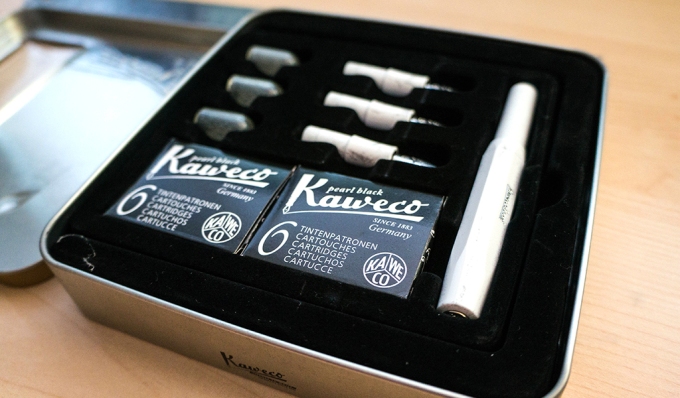 The special edition yellow kaweco classic sport just came in a plastic bag with some packaging bubbles. Simple and minimal waste, I don’t mind at all.

The nibs are tiny, as befitting a pocket pen. They measure about 1.7cm in size. My calligraphy set came with silver coloured steel nibs while the yellow pen came with the classic gold coloured steel nib. Both look nice, but I have a slight preference for gold because it is more blingy. 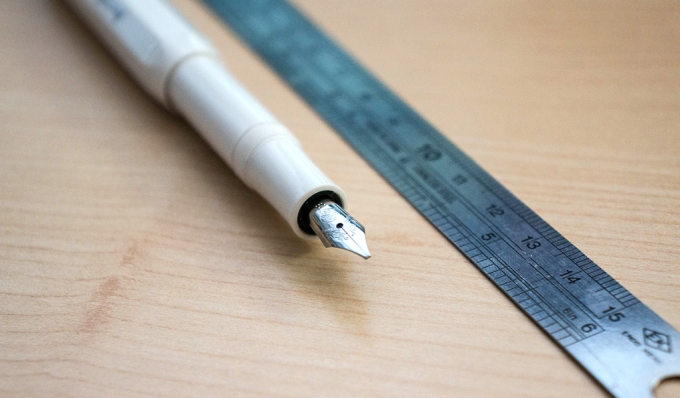 Feel
This is a great everyday pen for a several reasons. First of all, even though it’s packaged in a small size, the beauty of the pocket pen is that it can transform into a relatively full sized and usable pen. For my small hands, I could even argue I can use the pen without posting, but obviously it is much more comfortable posted.

My only gripe is that I haven’t used the pen for enough extended amounts of time to warrant capping because I end up having to recap it soon after I finish writing or doodling. And this goes back to me being lazy and not wanting to unscrew the cap on and off multiple times in one usage. Granted, the pen is decent quality enough that ink does not dry immediately after leaving it uncapped for a little bit of time.

As for actual performance, the pen is great for both writing and doodling. For me, even though the Platinum Centry 3776 Oshino is hands down my favourite pen right now, the nib is actually just a little too long for extended usage. The shorter distance between the nib tip and my finger grip actually is more comfortable on the Kaweco Sport. It gives me more control and precision, and ends up a little more comfortable in the long run for writing.

The nib itself produces a constant and smooth flow, with the steel nib material providing its usual rigidity and sturdiness. The classic F nib has been excellent so far. However, I have found that the calligraphy nibs sometimes start and stop, or has trouble starting after leaving the pen for a long time (even when fully capped). I don’t know if this is a manufacturing issue, or just that Kaweco has not mastered their calligraphy nibs compared to their classic point nibs. It is hard for me to judge however, since I don’t have much experience with calligraphy nibs, nor do I use them often at all. The starting and stopping happens more with the wider nibs, while the 1.1 and 1.5 seem to be relatively reliable.

All in all, the pens are good, and I have very little to complain about in terms of feel, both in performance and comfort.

Value
There is a reason certain brands and pens continue to be so successful and popular. For the Kaweco Classic Sport, it’s because the pen delivers quality and consistency for amazing value. The classic sport is not the cheapest entry level fountain pen you can buy, coming in at around an average of 25 dollars USD, but that’s slightly cheaper than a Lamy Safari, and arguably has the same quality and consistency of a Lamy. Ink capacity is a little less because it is a pocket pen, but if you’re looking for variety, a decent price as well as the convenience of a pocket sized pen, this is really the only choice. (Granted, my only pocket fountain pen experience comes from the Ohto set and those were just average despite being less than half the price.)

The Calligraphy set is a little pricey overall even though I purchased it through a massdrop. For my usage and also trouble with the start/stop of the pen nibs, I don’t think I would recommend getting the set unless you are an avid calligrapher or interested in being an avid calligrapher who likes collecting a variety of pens. The set isn’t a poor choice, but there are probably better options out there with better value.

Thanks for reading and sorry for being so inconsistent with posts! As my purchasing rate has gone down, so has my rate of producing reviews. Though it is mostly because work and projects have picked up and the hobby is not on the top of the priority list anymore. I still have a few more pens that I plan to review, so I’ll be back soon! 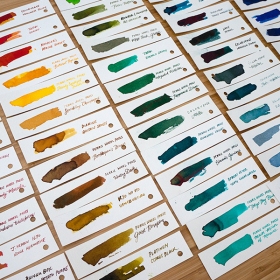