Hello! Happy to present another review again. Sorry for the hiatus but also thanks for sticking around if you’re reading! This one took me a long time because I wasn’t very enthused about using the pen after the first try, so it took a while to warm up to it. On top of that, I happened to receive the pen in the mail right before I took off for a short weekend getaway and when I got back it was a storm of busy-ness (trying to complete a video game counts as being busy right?). So here we are, a review of a more recent purchase, the Opus 88 Koloro Fountain Pen.

As an intro to why I even decided to get this pen — other than that it is in the yellow/orange range, is that I’ve seen quite a lot of this one popping up on other pen blogs and pen retailers. I was curious for sure, given that it was a relatively affordable ebonite pen. Ebonite is some form of harder plastic that is more expensive to produce. I have heard full ebonite pens can get quite pricey. Additionally, the use of ebonite for a feed can be quite useful when dealing with flex nibs or with harsher pen inks. In any case, I was intrigued. But I was struggling to justify the price point. It didn’t look particularly fancy or high-end. And yet the starting price for these pens are close to 100 and then beyond. I think I may touch a bit more on this when I get to the Value section. Let’s get started!

Look
Does this pen look super awesome? Not bad

This is a coloured demonstrator, and it’s also in the colour range of choice. But I’m not in love with the look of it. The overall pen is quite large, reaching about 14.5cm (5 3/4″) capped, with a twist cap made of ebonite and plastic, huge ink window and an ebonite twist knob at the end. I’ll admit I had no idea what I was getting into when I got this pen. I had read it is an eyedropper pen, but it didn’t register to me what that meant. Now when I look on the pen in close inspection, I see a huge ink capacity with a strange ‘pump’ mechanism at the base. I have now come to understand that twisting this bottom ebonite piece will encourage the ink to flow through the feed, which is directly attached to the ink well.

That aside, the pen is quite minimalist. The finial is also ebonite, and the pen clip is a simple silver clip with some tiny patterning along the edge for style. There’s a little translucent window for seeing the nib when capped. The entire body including the grip, minus the ebonite twist end is the same translucent orange. The nib is rather simplistic as well, with the company, Opus 88, and the nib size, B, etched on it. Some light scrollwork sits on either side of the breather hole. For such a HUGE pen, the nib sure looks disproportionately small.  It isn’t actually a very small nib, still measuring about 2cm. My favourite Platinum Oshino is about 2.3cm. 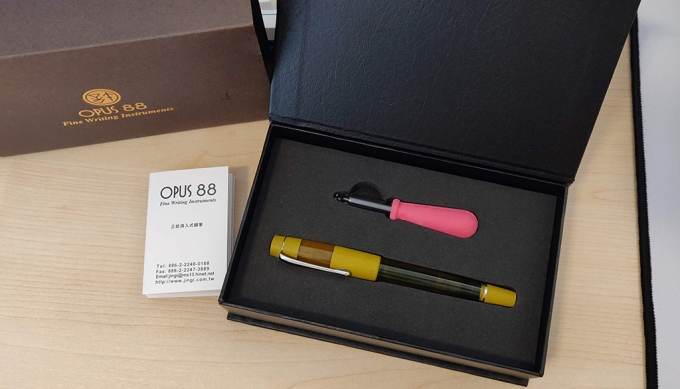 Packaging wise, the pen did not come in anything fancy. Paper sleeve on a magnetically closed box. Inside sits an eyedropper (which I haven’t touched), and the pen itself. A loose instruction manual sits with them.

To summarize my thoughts on the look of the pen, I think I’m quite neutral about it. I like the ideas behind the pen, but perhaps the execution just isn’t to my taste. I’m glad that I’ve gotten to a point where I can identify things that attract or detract me from a pen. That’s a sign of progress!

Just for fun, photo of what happened right after the one above. oops 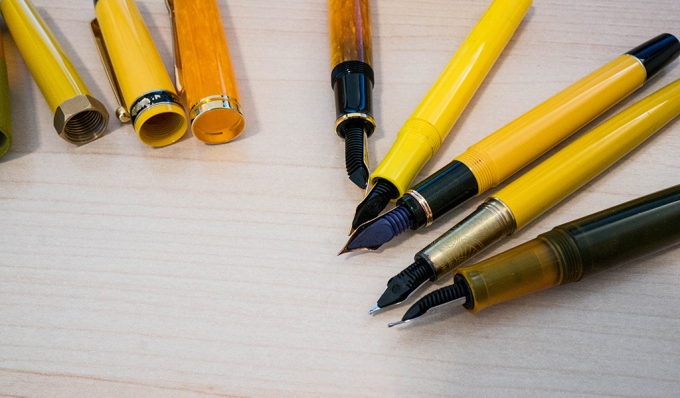 Feel
So my first impressions of the pen were a little grumpy because I really didn’t know how to use the pen. That’s my fault of course for not looking into it properly, and simply choosing to blame the pen instead. I was getting hard starts to no flow at all, everytime I picked the pen up, and plenty of skips while writing or drawing. Talk about frustrating! I even turned the end knob this way and that to no avail. That frustration set me back quite a bit and I then refused to use the pen for weeks.

I picked it up again recently hoping to crack down on this, write a review then promptly try and sell the pen off. I got to about the writing part. I still haven’t set up a page to sell off my pens — it’s a scary thought.

Anyway, I left the knob loosened this whole time, and magically, the pen was working when I picked it up again. So my conclusion is that this knob some how vacuum locks the barrel and doesn’t allow ink to flow out the nib. While loosening it up will let the ink flow again.

Now that the pen is working again for me, I finally decided to sit down and do a review. Early impressions aside, I’d still say the pen is of neutral status to me. It works decently, pen is sturdy, grip is comfortable, ink is flowing — ink barrel has insane capacity. However my trouble with the pen lies in very minute things that tend to add up to the overall experience of using a pen. Take, for example, the fact that the pen takes forever to uncap. I’m talking about what feels like at least 6 rotations before the cap even feels loose enough to pull off. As a comparison, Oshino has just under 2 rotations, Pelikan has just under 2 rotations. They also both tout a well designed mechanism that has minimal air leakage for drying up. I’m no expert with pen design, but 6 is definitely too much for me.

Aside from that, the pen’s overall functionality and usability are pretty great. Doesn’t’ feel too heavy or too light in hand. The size of the grip works for me as well, so long doodling sessions don’t tire me out. I ordered a Broad nib for this pen, a rare choice for me. This was because the store only had Broad in stock and I got worried the pen would be really hard to get the longer I waited. It’s out of production now, since Opus 88 is continually improving and producing new pens. While I’m generally not very fond of Broad nibs, I didn’t mind this one so much, since I got to really let ink gush out and actually see how it looks on paper. Generally my EF to F nibs don’t leave so much as a hairline of ink, so this was a nice change.

The thought behind my doodle this time — a plan of the famous Pantheon in Rome — was because the walls had such thick and heavy poche,  I thought it would work perfectly with a Broad nib when I filled all walls in with ink. These reviews tend to be excuses to doodle for me, though thinking of what to doodle takes me way longer than formulating an opinion of a pen.

Value
As I mentioned in my intro, this is going to be tricky. The pen has me sitting at neutral. It’s not an amazing poach for me, nor is it a terrible one. And I’ve had terrible ones I haven’t even bothered to review *sad face. The issue with being a $100+ valued pen, is that in this age of pen lore, and to the untrained eye, that’s considered luxury. We expect a pen over a hundred dollars to be excellently designed, made of pristine materials and also function like a workhorse. Okay this pen satisfies most of those. To put some perspective in: I paid a similar value for my Vanishing Point (on sale), and it was well worth the money. I paid just over that for my Oshino and that was a well worth investment – I use that pen everyday. I’d even throw in the Abalone pen, that was a closer to $150 (which this might as well been after tax), and it’s such a unique find that I’d say I’m pretty happy with it.

My disappointment in this pen is hard to explain. It’s also highly subjective because there have been plenty of positive reviews about this pen. And if anything, this is more of a mixed review for the pen. Don’t get me wrong, it is still a great pen. I just think at the end of the day I would have wanted to put my $150 somewhere else.

It was really hard to decide which ink to throw in here, especially knowing that the ink capacity is HUGE, and I’d have it inked for a long time. I went back on my reviews and noted the inks I haven’t yet reviewed, and this was one of them. Along with Schrodinger (which is one of my favourite colorverse inks), I also picked up Proxima B. I probably spent days just debating which ink to buy and I ended up with this one. I’m not sure why anymore.

I really like this ink! It’s a dark grey blue, and dries really beautifully on any paper. A bit of a dryer ink, which I tend towards because I don’t like waiting for ink to dry in my hasty doodles. Colorverse has a poopload more colours to pick from now, even though the old sets are out of production, so I feel like there will always be something to pick from. Definitely worth a look!

So that’s it, thanks for tuning in! A couple more goodies are coming (did someone say peeelikannn?), but as always, no guaranteed timeline for when those are coming. Cheerio 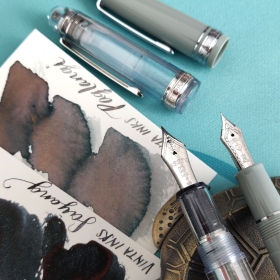 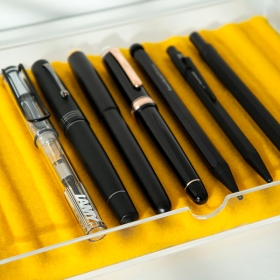 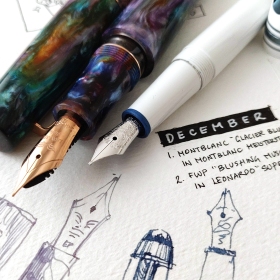