I wanted to make this quick post because I’ve been pretty happy with myself about this tiny notebook hack. The last time I posted about mini notebook hacks were some economical DIY Traveler Notebook inserts. This one is quite different, but also a result of an economic decision. 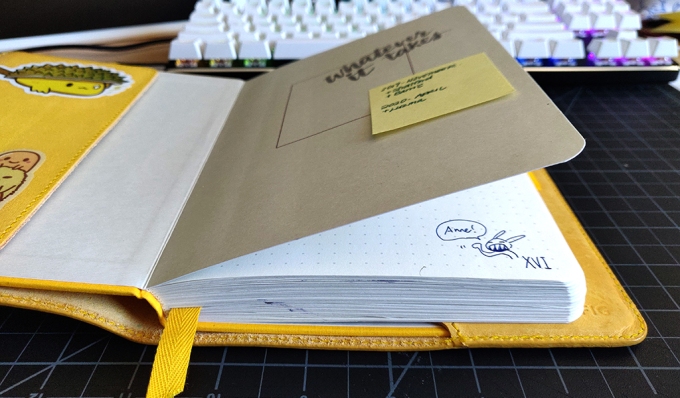 I’ve been using Baron Fig notebooks now since 2017 when I made my first review of their Confidant notebook and Squire pen. I also copped the limited edition Lock and Key edition (both of which remain unused because….fear of wear tear / sigh). Unsurprisingly enough, I whined about wanting to pick up the Guardian leather case for the Confidant notebook at the end of my review, but not really having any need whatsoever for it.

Couple months later, I went and bought it anyway during a sale because self control right? All in all I’m happy with it, especially because the case is a wonderful colour, one of my favourite shades of yellow. It doesn’t quite have the same quality or feel as the Traveler’s Notebook leather cover, but it still does it’s job in durability and general use. Here’s what mine looked like, wrapping up a Confidant notebook.

The Confidant notebooks themselves are actually not too expensive for what they offer. For $18USD, you get your bang for buck in a quality fountain pen friendly notebook. I use the ‘Flagship’ size, 5.4″ x 7.7″, slightly smaller than a typical A5 notebook. I’ve started using the notebook primarily for work, both my full time job as an Architect as well as my part-time teaching position – both of which involve lots of drawing and even more note taking.

Anyway, the main reason for this mini musing is because I was nearing the end of one of my Confidants that I started for work (See above my yellow on yellow glorious combo), and of course as noted above, did not want to start my last remaining Confidant, Mr Lock. So what do I do, I scour the Baron Fig website to see what I can get. Keep in mind the USD to CAD exchange is terrible right now, so I was also weary about spending too much on stationery I already have an excess of.

The yellow Confidant was sold out.
I’ve had too many grey Confidants.
The other colours wouldn’t match either (imo).

There was a new RED Confidant had just been released, so I picked that up, but I’m weird about matching my stationery, and did not think it would fit well with my yellow Guardian.

I started looking at other options with an idea in mind. The Vanguard, Baron Fig’s softcover notebook, uses the same paper and touts 72 x 3 pages = 216 pages, which is more than the 192 offered in the Confidant. Since I was just looking for a work notebook, having more pages and changing notebooks less often was actually kind of attractive. Despite not knowing whether my idea would work out, I threw the Vanguards into my shopping cart.

Couple weeks later, I have a stack of yellow Vanguard notebooks, a used-up Confidant and a chance to try out my idea. Stacking the three notebooks together, I stapled the covers of the middle notebook together to make one SUPER Vanguard. Slipped it into the Guardian leather case — and it works!

The Vanguard is a softcover notebook, so the first worry would be whether it can stand up to being stuffed inside a leather cover. There is actually a leather case for the pocket sized version of the Vanguard, so it seems it has already been tested to work out. The cover is definitely more flexible without the hardcover in the sleeve, but I actually really like that. It’s easy to grab, not as bulky and easy to flip through to what I need for work.

Next, the Vanguard is slightly smaller than the Confidant by a tad, only because it doesn’t have a hardcover. There wasn’t a problem then, getting the books to fit in the cover at all. Now because of the lack of hardcover, even three stacked notebooks end up less thick than the Confidant on its own. Was this a problem in a case designed for the hardcover? Not for me! I actually liked that there was a bit more space. I found the Confidant just a bit too snug, partly because I haven’t broken in the leather, but also just that it’s hard to get the book in and out of the cover when I’m switching. Now it’s an easy swap, and there’s no sign of the Vanguards falling out either.

Lastly, there is no decrease in quality for the paper! So I feel like I made it out a win-win here. A cheaper set of notebooks that still fit in my rather expensive leather cover, same quality paper, a more flexible cover option and a less bulky overall package.

Would anyone else give this a try??
Thanks for reading!