Hello again and welcome to the second edition of Monthly Inked! I started this early last year (when the lockdown started to be precise) when I was bound to spending more time working from home and having more access to my ink and pen collection on a regular basis. I decided to make better use of my excessive collection. And so, every month I pick a new pen and ink pairing. ‘New’ is now a loose term as I start my second year of this, since I don’t actually have THAT much to go around, and I tend to be very picky about which inks I actually want to use for work. So there have already been some duplicates, but that’s okay, because the overall pairing has varied and that’s what’s important here. 🙂

Thanks for joining along, I will be updating the page every month with my new rotation, so I’ll keep the post pinned at the top of the page!

Update end of 2021: That’s a wrap! I actually made it a full year, rotating pens on the regular. It makes me happy that I can not only cycle through a lot of my favourite pens I’ve collected over the years but also to give some time to each one. On top of that, being able to cycle through my ink collection or try out new inks I’ve picked up throughout the year is also really fulfilling. 🙂 Thanks for following along and hopefully some more pen things planned for next year! It was a drought-ish year for the pen blog, but I do have lots of new ideas and plans that just need to be executed ^_^ next up — Holiday Haul.

May
Main: Kyo no Oto “Aonibi” in Pilot Vanishing Point
Secondary: Robert Oster “Sooty Shearwater” in Lamy Safari (first pen I ever bought for myself!) 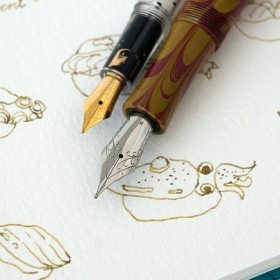 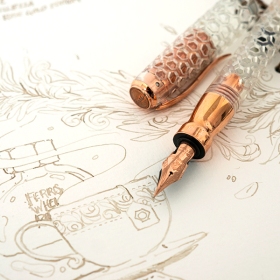